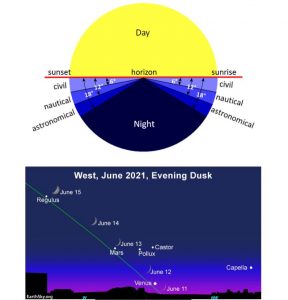 Our two neighboring planets, Venus and Mars, will be visible this month in the evening twilight. Look for Venus low in the northwest (where the Sun sets) around 9pm. Venus is the brightest object in the sky and will be visible until it sets after 10pm. Mars is much dimmer. Look for a reddish object that is not twinkling above and to the left of Venus. At the beginning of the month, Mars will be lining up to the left of the bright stars Castor and Pollux in Gemini the Twins. The Crescent Moon can help you spot these worlds. It will be below Venus on June 11th, midway between Venus and Mars on June 12th, and above Mars on June 13th. Watch how the distance between Venus and Mars closes. On June 1st, you should be able to place two outstretched fists between them. By June 30th, they are separated by only four fingers. Keeping watching as they near one another. Venus and Mars will be at their closest on July 11-12 when less than a pinky finger separates them with the Crescent Moon close by. If you have binoculars, get them out on June 22-24 to watch Mars pass in front of the Beehive Cluster. As Venus follows Mars, it will line up to the left of Castor and Pollux on June 24 and pass in front of the Beehive Cluster on July 1-3.

There’s not much night around the summer solstice, but there is plenty of twilight to enjoy. Stargazers like to distinguish between three types of twilight. You can give it a try on the summer solstice June 20th. The last sunset of spring is around 8:45. Civil twilight is from 8:45-9:20 when the Sun is less than six degrees below the horizon. That’s when we see all the amazing colors in the sky with oranges and reds in the west and purples and indigos in the east. Nautical twilight is from 9:20 until 10:05 when the Sun is between six and twelve degrees below the horizon. The brightest stars are visible and you can still see the horizon if you want to try celestial navigation with your sextant. Then there’s astronomical twilight from 10:05 until 11:05 when the Sun is between twelve and eighteen degrees below the horizon and the sky continues to darken. Give a cheer at 10:32. That’s the moment when our north pole tilts closest to the Sun and the northern hemisphere moves from spring to summer. The sky is only fully dark for four hours from 11pm until 3am when it begins to brighten and we go through the three twilights before the first sunrise of summer around 5:20am on June 21st. Hope you enjoy the worlds at twilight!

John Heasley is an astronomy educator and stargazer who enjoys connecting people with the cosmos. He volunteers with NASA/JPL as a Solar System Ambassador , with the International Dark-Sky Association as an Advocate, and the International Astronomical Union as a Dark Sky Ambassador. For more information about stargazing in southwest WI, like Driftless Stargazing LLC on Facebook and find out whenever there’s something awesome happening in the skies. Driftless Dark Skies appears monthly in the Voice of the River Valley. 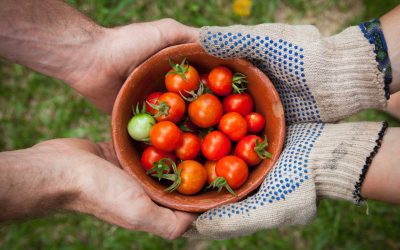 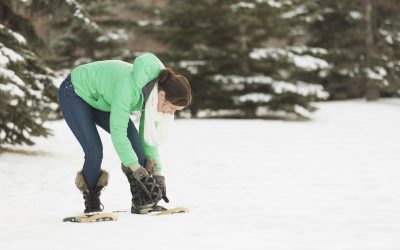 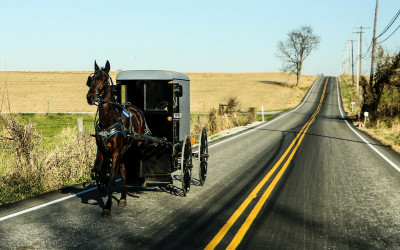 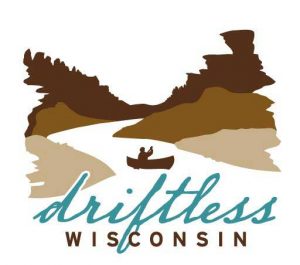